Review: A Night to Surrender by Tessa Dare 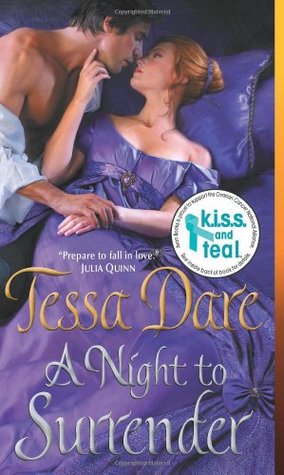 Welcome to Spindle Cove, where the ladies with delicate constitutions come for the sea air, and men in their prime are… nowhere to be found. Or are they?

Spindle Cove is the destination of choice for certain types of well-bred young ladies: the painfully shy, young wives disenchanted with matrimony, and young girls too enchanted with the wrong men; it is a haven for those who live there.

Victor Bramwell, the new Earl of Rycliff, knows he doesn’t belong here. So far as he can tell, there’s nothing in this place but spinsters… and sheep. But he has no choice, he has orders to gather a militia. It’s a simple mission, made complicated by the spirited, exquisite Susanna Finch—a woman who is determined to save her personal utopia from the invasion of Bram’s makeshift army.

Susanna has no use for aggravating men; Bram has sworn off interfering women. The scene is set for an epic battle… but who can be named the winner when both have so much to lose?

You guys, I have really been enjoying reading historical romances lately.  There’s something wonderful about reading purely for escapism, and that is what these types of books are for me.  They take me away from life, and lately I’ve needed that.  I have been hearing how wonderful Tessa Dare is for awhile now, but it took me awhile to actually read anything by Dare.  After reading Romancing the Duke (my review), I knew I had to read more, and I was not disappointed at all with the first book in Dare’s famed Spindle Cove series, A Night to Surrender.

When Victor Bramwell comes to Spindle Cove, he is not expecting to be given an title (the new Earl of Rycliff) for his outstanding military service, and asked to create a volunteer militia from the town’s citizens.  All he wants is get back to the war front, after suffering from a debilitating injury that has taken nearly a year to heal.  Believing that if he succeeds in creating a militia, he’ll receive a recommendation by Sir Lewis Finch (famed weapons inventor) to return to the front lines, he takes on this responsibility extremely seriously.  But Finch’s daughter, Susanna, is not pleased with the changes to her beloved Spindle Cove.  Susanna has helped create Spindle Cove’s reputation for a refuge for young ladies.  And a village full of a rowdy militia will frighten mamas and their daughters away.

Oh my gosh, you guys, this book starts off with a bang.  Quite literally, actually, with a sheep bombing.  What is a sheep bombing, you might ask.  Well, you’ll have to read the book to find out.  It was the perfect start for this book, though, setting the tone for A Night to Surrender.  You guys, I LOVED the setting for A Night to Surrender.  Spindle Cove is this safe haven for women.  The young ladies can recuperate from an illness, but also gain confidence in who they are.  And if their interests lie in areas not suitable for young ladies, well, they can pursue them in Spindle Cove without fear of being laughed at.  The residents of Spindle Cove really bring this small, sea-side town to life.  From the blacksmith who loves to tinker with lockets, and the chef who loves to make delicate pastries, they all have their own personalities, and bring something wonderful and special to the town, and this story.

Susanna loves Spindle Cove.  It’s definitely her safe haven, and she works tirelessly to make it a safe haven for women from every corner of England.  So when Bramwell arrives, and starts organizing a militia, Susanna is terrified that it will effect Spindle Cove’s reputation as being a safe place for young ladies (a place lacking young men pursuing young women).  I loved Susanna.  She’s overcome a lot, and her desire to help other young women is really admirable.  She could easily just keep to herself at her father’s home, but she goes out of her way to help these women.  I love that Susanna will do anything for Spindle Cove and its residents.

Bram is pretty darn swoon worthy.  He was extremely devastated when a serious injury forced him to return to England to recuperate.  Military life is all he has ever known, and he’s very proud of his successes.  Trying to figure out a new life is unacceptable to him.  He’s such an honorable guy, even if he’s a bit single-minded.  But Spindle Cove and it’s residents leave their mark on Bram.

The romance between Susanna and Bram is very steamy.  Right from the beginning, Susanna and Bram have a lot of chemistry.  But it’s so much more than chemistry.  It’s so obvious how they are good for each other.  And even though they both struggle a bit with their feelings for the other, eventually they come together, and it’s pretty amazing.

I adored A Night of Surrender by Tessa Dare.  It immediately dragged me under, and didn’t let me up for air until I finished it.  This is everything that I want in a historical romance: a strong, likable heroine, an honorable, steady hero, a full cast for supporting characters, and an amazing setting.  I cannot wait to visit Spindle Cove again, to see what’s next for it’s residents.

I'm a twenty-something children's librarian at a public library in Central New York. I've long left my teen years behind me, but I love to read YA and children's books. I have two adorable dogs. Ginger is a mix between a poodle and havanese, and Daphne is Bichon Frise. Other things I love: Favorite Movie: Singing in the Rain Favorite Book: Pride and Prejudice by Jane Austen Favorite TV Show: Monk
View all posts by Quinn →
This entry was posted in 4 Star Reviews, Reviews and tagged A Night to Surrender, Book Review, Spindle Cove, Tessa Dare. Bookmark the permalink.

2 Responses to Review: A Night to Surrender by Tessa Dare