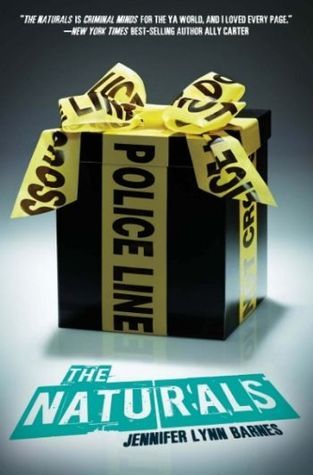 Seventeen-year-old Cassie is a natural at reading people. Piecing together the tiniest details, she can tell you who you are and what you want. But it’s not a skill that she’s ever taken seriously. That is, until the FBI come knocking: they’ve begun a classified program that uses exceptional teenagers to crack infamous cold cases, and they need Cassie.

What Cassie doesn’t realize is that there’s more at risk than a few unsolved homicides— especially when she’s sent to live with a group of teens whose gifts are as unusual as her own.

Sarcastic, privileged Michael has a knack for reading emotions, which he uses to get inside Cassie’s head—and under her skin. Brooding Dean shares Cassie’s gift for profiling, but keeps her at arm’s length.

Soon, it becomes clear that no one in the Naturals program is what they seem. And when a new killer strikes, danger looms closer than Cassie could ever have imagined. Caught in a lethal game of cat and mouse with a killer, the Naturals are going to have to use all of their gifts just to survive.

I had a difficult time deciding how I felt about The Naturals by Jennifer Lynn Barnes.  I mean, I definitely liked it.  It was a fun read.  However, I did read The Naturals shortly after reading some amazing mysteries, specifically I Hunt Killers by Barry Lyga, that I couldn’t help but compare then, and find The Naturals lacking a bit.  That said, I did like enjoy The Naturals, and I do recommend it.  It’s just not an all-time favorite of mine.

Cassie, the main character, hasn’t had the best life.  She didn’t know her father, or his family, until she was twelve years old.  At that age, she went to live with her father’s mother, and, although everyone has tried to make Cassie feel a part of the family, Cassie’s always felt a bit separate.  Cassie also is fantastic at reading people.  She can look at someone, say a customer at the diner where she works, and quickly know what that person is like.  She’ll know what he will want for breakfast, what type of occupation he has, and so on.  This special talent of Cassie has brought her to the attention of a unique FBI program for teens with talents such as Cassie’s.  She’s invited to attempt this program, near Washington, D.C., and Cassie accepts.

Cassie has a lot of great things about her.  She’s very independent, she’s determined, and she wants to help solve crimes with her special talents.  However, even though she has many admirable qualities, I just never was able to warm up to her.  I can’t put my finger on exactly why I wasn’t able to form a strong connection to Cassie, but the result is still the same.  I liked her, admired her even in certain situations, but that’s about it.

Barnes did an excellent job creating some interesting characters for the other teens at the special FBI program.  These teens are called Naturals, because they have a natural aptitude for certain talents.  Another teen, Dean, is like Cassie.  He can read people, without even thinking about it.  Michael can read emotions, Lia can always tell if someone is lying and Sloane can understand patterns and figure out numbers like nobody else.  Each character has a strong personality, and they feel pretty well-developed.  They each have some emotional baggage they’re caring around, including Cassie.  As much as I loved the interesting characters, I do think that they did act a little unrealistic at times.

I’ve never made it a secret that I’m really not a fan of love triangles, and unfortunately (for me) their was a bit of one going on in The Naturals.  This book doesn’t really focus on a romance, but there is some attachments forming pretty quickly between Michael, Cassie and Dean.  I definitely was not a fan of that.  I really can’t relate at all to that kind of thing, and I definitely wasn’t a fan here.  It definitely affected how I felt about The Naturals.

Obviously, The Naturals is a mystery.  There’s a serial killer around, and when this baddie becomes fascinated with Cassie, the stakes become even higher.  Okay, so I’ve read a lot of mysteries.  I used to read them all the time when I was a teen, and I read them from time to time now as well.  I think, since I’ve read so many, it’s easy for me to pick up the clues the author’s leaves, and it was not that difficult for me to figure out who the baddie was.  It didn’t ruin the book for me, though, because I was more interested in reading about how Cassie, and the team, figure it out.  That said, I was a bit underwhelmed by the mystery.  Having recently read I Hunt Killers, which even managed to surprise me a bit, it was hard to not be a little underwhelmed.

I’ve criticized The Naturals a bit in this review, but I did really enjoy the book.  It’s a very quick read, and it was an interesting concept – focusing on teens with natural aptitudes for skills that many adults have to study years to be become proficient.  The Naturals was a fun book.  I wasn’t by any means amazed, but it was a fun read, and I would certainly recommend it to anyone who likes an easy mystery.

I'm a twenty-something children's librarian at a public library in Central New York. I've long left my teen years behind me, but I love to read YA and children's books. I have two adorable dogs. Ginger is a mix between a poodle and havanese, and Daphne is Bichon Frise. Other things I love: Favorite Movie: Singing in the Rain Favorite Book: Pride and Prejudice by Jane Austen Favorite TV Show: Monk
View all posts by Quinn →
This entry was posted in 4 Star Reviews, Reviews and tagged Book Review, Jennifer Lynn Barnes, Teen Book Review, The Naturals. Bookmark the permalink.

1 Response to Review: The Naturals by Jennifer Lynn Barnes