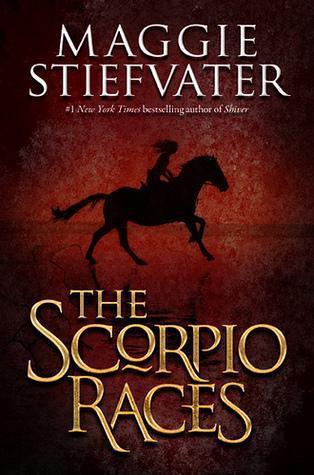 It happens at the start of every November: the Scorpio Races. Riders attempt to keep hold of their water horses long enough to make it to the finish line. Some riders live. Others die.

At age nineteen, Sean Kendrick is the returning champion. He is a young man of few words, and if he has any fears, he keeps them buried deep, where no one else can see them.

Puck Connolly is different. She never meant to ride in the Scorpio Races. But fate hasn’t given her much of a chance. So she enters the competition — the first girl ever to do so. She is in no way prepared for what is going to happen.

So, I have a routine for when it comes to writing my reviews for the blog.  The vast majority of the time, I write my review no more than 24 hours after finishing the book.  If I wait much longer than that, I usually have a hard time remembering details about the book, and often I move onto another book.  However, I have been putting off writing my review for The Scorpio Races.  And although a small part is because I was just being lazy and procrastinating, most of the reason is something else.  I kept thinking “How can I adequately express how amazing not only this book is, but how phenomenal the audiobook is?”  No matter what I say, I’m not going to do this book justice.  But I’m gonna try anyway.

You guys, Maggie Stiefvater has written such a beautiful story.  The writing alone is beautiful, and evoked so much emotion in me.  So many phrases she used stuck with me.  The language Stiefvater uses is just perfect for this story, perfectly setting the tone of the novel.  The language used in this book alone makes it worth a try.

As for the plot – it’s such an interesting one.  It revolves around this idea of water horses.  Water horses are similar to Kelpies, but of course, Stiefvater has taken the mythology and made it work for her.  Water horses live in the ocean (but they can also live on land), and they eat flesh.  People flesh, animal flesh, they aren’t picky.  Every year, on the island of Thisby, the Scorpio Races take place where riders race a water horse along the beach.  But this year, Puck (Kate) Connelly decides to compete, making her the first female to ever enter the race.  The whole world created around Thisby was fascinating.  This island that makes life so difficult for almost all the inhabitants, is also loved by our main characters Puck and Sean.

Puck is an interesting character.  She’s not had an easy life, but she’s happy, for the most part, living with her two brothers.  But when she learns of Gabe’s plans, she decides, spur of the moment to enter the races.  Puck is very fiesty, but I don’t mean that in the romance novel fiesty main character.  She’s just herself.  She loves Thisby, and never wants to leave.  She loves her horse, Dove.  She loves her family, and wants to be with them.  She’s certainly no push over, and I think she likes being a little testy to people.  Puck is absolutely nothing like me, but I felt like I knew her so well.  I loved her for her stubbornness, and quick temper, but also for her determination and love of her family.  And for her love of her home.

Sean Kendrick, our other main character, is a nineteen-year-old.  He’s almost a man, really, and has been living on his own for years, since his father died.  He’s filled with knowledge on regular land horses, and water horses, and many people rely on his horse skills.  And although water horse are incredibly dangerous, he loves them.  He never wants to hurt them.  And Sean Kendrick’s love for Corr, his water horse is beautiful, if difficult for me to understand.  Sean Kendrick is the kind of guy I would have crushed on hard in high school.  He’s not flashy; he’s quiet and reserved, and a hard worker.  He takes his job seriously, and he’s always looking out for other people.

Sean and Puck are the focus of The Scorpio Races, of course (the novel is told in dual POV between them), but Stiefvater imbeds so many other well-developed, fascinating characters in her novel.  Stand outs for me are George Holly, a wealthy American, visiting Thisby looking for new horses, and Finn and Gabe, Puck’s brothers.  I loved George Holly, the only American in the book, I think.  He’s always there to give Sean advice.  Oh and Puck’s brothers were so interesting.  At first, I was furious with Gabe.  I couldn’t understand how he could do what he was planning.  But, of course, as I continued to read the story, I started to understand where Gabe was coming from.  Finn, Puck’s little brother was adorable, but not in the cutesy way.  Stiefvater keeps talking about Finn’s Frog Face expression, and I really enjoyed picturing what that would look like.

Obviously, I loved this story.  The only thing that I wish it had was more time with Sean and Puck interacting with each other.  I loved these characters so much, and I wanted to see them spending more time together.

Now I have to discuss the audiobook aspect.  I think I enjoyed this book as much as I did in large part due to the fact that the audiobook was so amazing.  I’ve heard a few people say that the beginning of this book felt slow to them.  I never felt that way, but that could be because I was loving the narration so much.  There are two narrators, Fiona Hardingham for Puck’s chapters, and Steve West for Sean’s chapters.  Both were brilliant, and brought so much life into their characters.  But Steve West’s voice made listening to The Scorpio Races even more enjoyable.  His voice as Sean was beyond attractive.  I’m talking earcandy, here folks.  His voice felt very grounded, and I can’t picture any other voice for Sean.  As much as I loved Puck’s chapters, I was constantly impatient for Sean’s chapters so I could hear Steve West again.

I'm a twenty-something children's librarian at a public library in Central New York. I've long left my teen years behind me, but I love to read YA and children's books. I have two adorable dogs. Ginger is a mix between a poodle and havanese, and Daphne is Bichon Frise. Other things I love: Favorite Movie: Singing in the Rain Favorite Book: Pride and Prejudice by Jane Austen Favorite TV Show: Monk
View all posts by Quinn →
This entry was posted in 4 Star Reviews, Reviews and tagged Book Review, Maggie Stiefvater, Teen Book Review, The Scorpio Races. Bookmark the permalink.

8 Responses to Audio Review: The Scorpio Races by Maggie Stiefvater