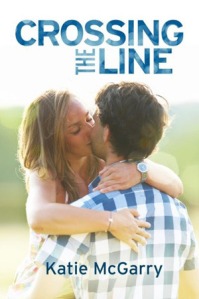 Katie McGarry captivated readers with her “riveting, emotional”* Young Adult debut, Pushing the Limits. In this gripping novella, she tells the story of Lila and Lincoln, who discover that sometimes it’s worth crossing the line for love…

Lila McCormick, Echo’s best friend from Pushing the Limits, first met Lincoln Turner when tragedy struck both their lives. But she never expected their surprise encounter would lead to two years of exchanging letters—or that she’d fall for the boy she’s only seen once. Their relationship is a secret, but Lila feels closer to Lincoln than anyone else. Until she finds out that he lied to her about the one thing she depended on him for the most.

Hurting Lila is the last thing Lincoln wanted. For two years, her letters have been the only thing getting him through the day. Admitting his feelings would cross a line he’s never dared breach before. But Lincoln will do whatever it takes to fix his mistakes, earn Lila’s forgiveness—and finally win a chance to be with the girl he loves.

Katie McGarry’s Pushing the Limits was a highlight read for me last year.  I fell in love with Noah and Echo, of course, but with some of the secondary characters as well, including Isaiah, Beth and Lila.  So when I found out about this novella featuring Lila, I knew I would be reading that straight away.  Although I liked it, I can’t say it was amazing, but I think that is because it’s a novella.  It’s so short that I wasn’t able to connect to the characters as much as I wanted to.

This novella is told in alternating POVs (like Pushing the Limits) between Lila and Lincoln.  I think McGarry does pretty well letting us (the readers) know who these two characters are in such a short story.  But some things I just couldn’t get.  For example, I couldn’t understand Lila’s fears.  She is so scared of some things, and I wanted to know why.  I mean, her fears seemed a little blown out of proportion.  Also her fear about going to a college where she didn’t know anyone – I mean that is kind of normal, isn’t it?  I don’t know.  But I really did like Lila, and I wish we could have gotten to know her a bit better.

Lincoln is pretty awesome.  I can’t say that he is Noah- swoon-worthy, but I felt like he could have been if we were able to know more about his story.  I really wanted to read more scenes with him dealing with his dysfunctional family.  Again, I think this is just because Crossing the Line is a novella.  I think that’s just the facts with novellas.

Overall I really enjoyed Crossing the Line.  Did it give me the same feeling as Pushing the Limits did?  No, but it was definitely worth the read and the less-than-two-dollars price tag.  I still cannot wait to read Dare You To!

I'm a twenty-something children's librarian at a public library in Central New York. I've long left my teen years behind me, but I love to read YA and children's books. I have two adorable dogs. Ginger is a mix between a poodle and havanese, and Daphne is Bichon Frise. Other things I love: Favorite Movie: Singing in the Rain Favorite Book: Pride and Prejudice by Jane Austen Favorite TV Show: Monk
View all posts by Quinn →
This entry was posted in 3 Star Reviews, Reviews and tagged Crossing the Line, Katie McGarry. Bookmark the permalink.

4 Responses to Review: Crossing the Line by Katie McGarry