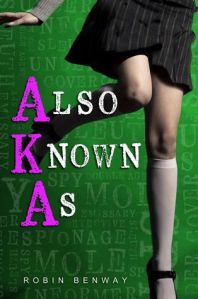 Being a 16-year-old safecracker and active-duty daughter of international spies has its moments, good “and “bad. Pros: Seeing the world one crime-solving adventure at a time. Having parents with super cool jobs. Cons: Never staying in one place long enough to have friends or a boyfriend. But for Maggie Silver, the biggest perk of all has been avoiding high school and the accompanying cliques, bad lunches, and frustratingly simple locker combinations. Then Maggie and her parents are sent to New York for her first solo assignment, and all of that changes. She’ll need to attend a private school, avoid the temptation to hack the school’s security system, and befriend one aggravatingly cute Jesse Oliver to gain the essential information she needs to crack the case . . . all while trying not to blow her cover.

I can’t believe how much I loved this book!  I’m not exactly sure what I was expecting, but what I got was a hilarious book with an amazing main character, fabulous, well-developed secondary characters, and a fun, fast-paced story!  There is just so much to love about this book.

I just have to talk about the fabulousness that is Maggie, the main character.  She is probably one of my favorite main characters that I’ve seen in a book in awhile.  She always has something hilarious to say, and has a wealth of comebacks!  She is smart, and clever, but she still makes mistakes.  Even though I’m pretty sure most of us can’t relate to being a sixteen-year-old safecracker and spy, I think we can all still relate to Maggie’s feelings and reactions in this book.  She is an incredibly likable character.

Oh, and the secondary characters is this book are, as Maggie would say, Ri-Donk-ulous!  Roux almost stole the show, I have to saw.  A former mean-girl, turned social outcast, Roux was such a wonderful addition to the story.  I love that Benway gave us a character who was such a bi-otch before, but has learned to be a nice girl.  And let me tell you , Roux is just about the funniest character.  I love her interactions with Harold!  Oh, and at the end with the Chess pieces.  I just can’t express well enough my love for Roux.  I’m pretty sure you will all love her.

The love interest, Jesse Oliver, is pretty darn adorable.  I can’t say he was swoon-worthy, but I think that he was perfect for the story, and for Maggie.  Not everyone can be swoon-worthy, and it is kind of nice that Jesse Oliver (I keep thinking of him as Jesse Oliver, like Maggie!) is fairly normal.

Okay, so the story was super fun.  I don’t think it was a mystery, exactly, but I liked seeing Maggie figure out what was going on.  I loved this whole idea of Maggie being this genius safe-cracker with spies for parents.  Oh, and spies aren’t all James Bond like.  They are much more “beige” and blend in.  It was great!

Anyway, you guys just have to give this book a try.  It’s hilarious with characters that are wonderful and well-developed.  I actually think that if you are a fan of Meg Cabot, you would enjoy this book.  Oh, and fans of Ally Carter, too.  Anyway, do not miss this one!

I'm a twenty-something children's librarian at a public library in Central New York. I've long left my teen years behind me, but I love to read YA and children's books. I have two adorable dogs. Ginger is a mix between a poodle and havanese, and Daphne is Bichon Frise. Other things I love: Favorite Movie: Singing in the Rain Favorite Book: Pride and Prejudice by Jane Austen Favorite TV Show: Monk
View all posts by Quinn →
This entry was posted in 4 Star Reviews, Reviews and tagged Also Known As, Robin Benway. Bookmark the permalink.

7 Responses to Review: Also Known As by Robin Benway