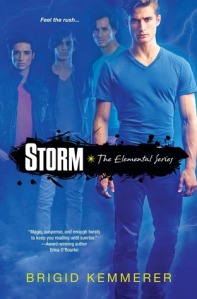 Becca Chandler is suddenly getting all the guys all the ones she doesn’t want. Ever since her ex-boyfriend spread those lies about her. Then she saves Chris Merrick from a beating in the school parking lot. Chris is different. Way different: he can control water just like his brothers can control fire, wind, and earth. They’re powerful. Dangerous. Marked for death.

And now that she knows the truth, so is Becca.

Secrets are hard to keep when your life’s at stake. When Hunter, the mysterious new kid around school, turns up with a talent for being in the wrong place at the right time, Becca thinks she can trust him. But then Hunter goes head-to-head with Chris, and Becca wonders who’s hiding the most dangerous truth of all.

The storm is coming

I’m kind of having a difficult time starting this review.  I can’t really think how to intro the review, so I’m just going to jump right in and get to the meat of the review.

The MC, Becca, was a pretty great character.  I didn’t love her, but I did like her.  She is dealing with some tough issues, so she really doesn’t think the best of any guys at her school.  I can definitely understand why she is distrusting of nearly everyone, but sometimes she made decisions that I just can’t picture someone in her position doing.  Like going to her ex-boyfriend’s house party.  I mean, what did she think was going to happen?  Oh, or when she left the dance.  Talk about idiotic!  But, mostly I liked Becca.

I have to say, I was expecting Chris to be a bit more determined and confident, especially when looking at the cover.  But he really isn’t.  He can be a bit insecure, especially when dealing with Becca.  Again, I liked Chris, but I wasn’t in love.  I did enjoy reading about the Merrick family.  Chris lives with his three older brothers: Michael, Gabriel and Nick.  I was especially intrigued about Gabriel, and I think he has his own story in Spark which was just released.

So there is a bit of a love triangle in this book.  I think I’ve mentioned how I don’t like love triangles much in books.  So, I wasn’t really thrilled with this.  And, as to other plot points, I could totally see who the “bad guy” was long before the end of the book. That’s not really a deal breaker for me though.  I don’t mind knowing how things are going to end.

Although there is a satisfying conclusion, there are a number of questions left unanswered.  Hopefully we will get answers in the next few books.

Overall, I liked this book.  It actually kind of reminded me of Obsidian (no aliens, though), but I like Obsidian more than Storm.    So if you are looking for something to hold you over until Opal is released in December, give Storm a try.

I'm a twenty-something children's librarian at a public library in Central New York. I've long left my teen years behind me, but I love to read YA and children's books. I have two adorable dogs. Ginger is a mix between a poodle and havanese, and Daphne is Bichon Frise. Other things I love: Favorite Movie: Singing in the Rain Favorite Book: Pride and Prejudice by Jane Austen Favorite TV Show: Monk
View all posts by Quinn →
This entry was posted in Reviews and tagged Brigid Kemmerer, Storm, The Elementals Series. Bookmark the permalink.